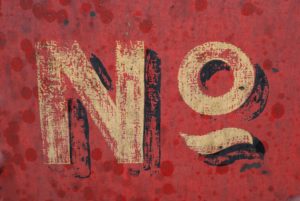 Sensitive people don’t like to disappoint others. We want to help. Empaths know what you are feeling, what you want. Also, we have trouble with boundaries. A lot of trouble. And people who don’t respect boundaries are often drawn to us. Saying “no” is a challenge for us.

Two thoughts to keep in mind:

You can still be a good person and say no.

“No” is a complete sentence. ~ Annie Lamott

Highly sensitive people often say “yes” because they want to be kind. But is it really kind to say “yes” when you mean “no?” It is dishonest at best and underhanded at worst. Because when you say “yes” to a commitment but don’t mean it, you have planted the seeds of resentment.

” A great way to tell when you feel ‘no’ is to watch for resentfulness. Resentment is the red flag that lets you know you are in a situation with an energy imbalance, where you are giving more to a situation than you are getting back.” ~ Lisa Campion

~ Don’t apologize for saying no.

~ Giving a reason is optional.

~ Provide an alternative, if you wish.

Be prepared – people do not like hearing “no.” (Do you?) So there will be some uncomfortable feelings. We just gotta ride that wave til it passes. Not passing, make an exit til the tide clears.

People say “no” all the time. You can too. When you say “no” to others, it is often saying “yes” to yourself – to your beliefs, to your time, to your own needs. Say “yes” to you.