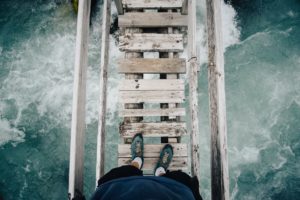 Some would say that there is a fine line between reckless and fearless. However, their definitions and modus operandi are quite different. Reckless is defined as “without thinking or caring about the consequences of an action.” Fearless is defined as “brave, courageous, unshrinking, intrepid, calmly resolute in facing dangers.”

I urge us to be fearless, and to recognize that it is a constant state of becoming. “I feel my self becoming the fearless person I have dreamt of being. Have I arrived? No. But I’m constantly evolving and challenging myself to be unafraid to make mistakes.” (Janelle Monae)

“Fearlessness is like a muscle. I know from my own life that the more I exercise it the more natural it becomes to not let my fears run me. The first time we take that first fearless step, we begin to change our lives. And the more we act on our dreams and desires, the more fearless we become and the easier it is the next time.” ~ Arianna Huffington

Be fearless, build up, be bold, become.