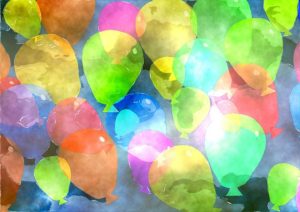 My step grandfather had a crying balloon. Whenever we cried, he would pull it out. The same sturdy red balloon. He would blow it up large, then stretch the opening, so it would make a loud whining sound. And he would laugh at us. Our tears were funny. Our fear was funny. And nobody stopped him.

Toddlers cry. Young children cry. It’s a part of one’s emotional make up when as a child, one is figuring out the world. My grandparents’ house was a big, old, scaryish place for a little kid. We sometimes got scared or sad or hurt and would cry. His reaction to us alarmed us even more. But why was it not alarming enough for the other adults around us to tell him to knock if off? They were silent bystanders to his shameful theatrics. Making us feel alone and unprotected.

Bullies aren’t born. They are made. My step grandfather did this because he could. My grandmother said nothing. My parents did nothing. My aunt sat mute. Everyone watched him mock and frighten us – small children. He could do what he wanted without rebuke. And he did. Eventually, he did much worse. So bad that my cousin and I needed years of therapy and hundreds of miles of distance to heal from his abuse.

So why am I telling you this story? It is a cautionary tale. Do not stand idly by when you see bullying – no matter how small. Speak up. Name what you see. Stand up for the innocent. Because a bully’s actions will continue to grow much worse and more dangerous. If they can. And silence will fuel a bully’s behavior. Smaller actions lead to bigger more harmful actions. If they go unchecked. And silence is a bully’s biggest ally.

In our families, in our communities, in our governments, in our world, we can see unchecked bullying that preys on the most defenseless in the room/situation. Stand up! We must speak out to injustices both small and large. Empathy seeks justice. Bullying denies it. But indifference denies it too.