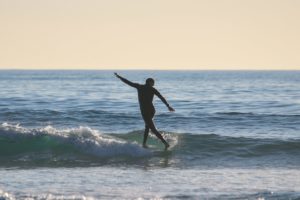 Resilience IS the capacity to recover from difficulties. Resilience IS the ability to bounce back from tragedies. We all have it. But some seem to have it more than others. Some people in the same circumstances often end up with very different outcomes. Some move on, and some get stuck in the hole.

When real tragedy is up close and personal, we react with fight, flight, submit, or freeze. These reactions rely on instinct. But step two, after the horribleness has happened, is where resilience comes in. We can’t stop difficulty and tragedy from coming our way (and sometimes it feels like there is a target on our backs) but we can push through it to the other side. The awful experience(s) can become part of our history, but NOT our self-definition.

I hate being stuck. I can’t stand it. Awful times bring awful feelings. If we ignore them, they become an internal tsunami. Empaths and highly sensitive people have to open up the floodgates, let the feelings wash through them, and then get help to clean up the aftermath. It is intense, but it works. Change is the process of getting unstuck. We have to be unstuck to move forward and to rise up.

While we are healing, we have to be gentle with ourselves. Would we judge a hurricane survivor? No. So don’t judge yourself. We need help and support  from people we know and people we don’t know. Be around positive people (even if they are only characters in books or movies). Avoid naysayers and people who don’t like change. Embrace the underdogs for their stories of inspiration. They are the BEST role models for resilience. (Uh, Oprah?)

Have faith and look for the light at the end of the tunnel. It may look like a tiny match at first. But as you get closer, one step at a time, and one day at a time, the tiny light will become a sunrise. Hope will return. Better will return. And one day you will realize that you made it through. Resilience won.