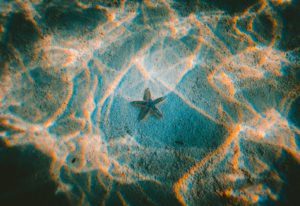 A child teaches us that we can always make a difference:

“One day an old man was walking along the beach. It was low tide, and the sand was littered with thousands of stranded starfish that the water had carried in and then left behind.

The man began walking very carefully so as not to step on any of the beautiful creatures. Since the animals still seemed to be alive, he considered picking some of them up and putting them back in the water, where they could resume their lives.

The man knew the starfish would die if left on the beach’s dry sand but he reasoned that he could not possibly help them all, so he chose to do nothing and continued walking.

Soon afterward, the man came upon a small child on the beach who was frantically throwing one starfish after another back into the sea. The old man stopped and asked the child, “What are you doing?”

“Why waste your time?… There are so many you can’t save them all so what does is matter?” argued the man.

Without hesitation, the child picked up another starfish and tossed the starfish back into the water… “It matters to this one,” the child explained.”   (as told by Loren Eiseley on All-Creatures.Org)

This story is timeless for we see ourselves in the man, the child, and the starfish (both the forgotten and the rescued). The man is old and cynical. He knows that he can’t change the world for all, so he gives up. The child is hopeful and determined. The child will help all that s/he can and know that the help matters. The starfish have been washed up on shore by the waves of life. They will die without help from another or without the luck of high tide. Either way, they are currently unable to control their fates.

We are all of them. Yet, we can clearly see the truth of the story. If you were one starfish, wouldn’t you want to be helped and put back in the ocean? And wouldn’t you want to be the child helping all of the starfish that he could? The child shows the old man that hope is eternal. Never give up; never give in. Hope with action is our refuge, our duty, and I would argue it’s our natural humanity.